An Introduction to Miso & Koji from Chef Hari

When I was a child and felt under the weather, my father would make miso soup for me. It was his form of medicine, kind of like the chicken noodle soup that many other kids enjoyed. I loved the brown, cloudy, onion heavy, salty broth paired with the silkiness of the tofu and texture of the shaved mushrooms. This soup had a savory flavor unlike anything that I had tasted at the time and a deep umami that I would chase much of my adult life as a professional chef. My dad was really ahead of his time with this soup recipe, as well as his understanding of the health benefits of a macrobiotic diet and the probiotic nature of miso, which scientists are only just now beginning to truly understand.

So, what is Miso?

Miso is a Japanese seasoning paste traditionally made from fermented soybeans and rice that has been injected with a filamentous mold or fungus called Aspergillus oryzae or Koji. Koji is a culinary mold well known abroad, and is now beginning to carve out its own space here in the U.S. It’s used to create a wide variety of products, including beverages like amazake, sake, and shochu; condiments like rice vinegar, mirin, tamari, shio koji, and shoyo (soy sauce); and many different styles of miso and amino paste.

How is Koji made and what is it used for?

The magic happens when the rice is soaked in water, steamed, cooled to 104 degrees Fahrenheit, and then coated with rice flour and koji-kin spore. From there, the spores are held in a climate-controlled cabinet at 87 degrees Fahrenheit for 48 hours at high-humidity, until the rice smells of sweet citrus and mushroom. At this point, the mold is fully grown inside and outside of the rice grains, forming a furry white block of finished koji.

When koji rice is used in cooking, it converts starches into simple sugars through amylase enzymes and protein into amino acids through the protease enzyme. This creates umami, which is a meaty or savory quality in foods (just like in my dad’s miso soup).

Modern chefs around the globe (myself included) are harnessing the properties of koji to create exciting, umami-rich dishes full of savory amino acids, employing innovative new techniques with ancient methods and elevating cuisine to a new level.

There are so many uses for Koji that my friends, Chef Rich Shih and Jeremy Umansky, 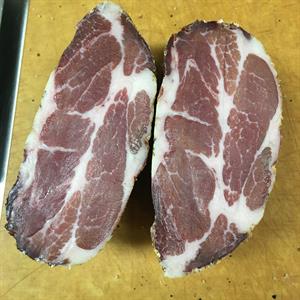 recently wrote a book about it! Koji Alchemy: Rediscovering The Magic of Mold-Based Fermentation explores the science of everything Koji from using Koji rice to accelerate the fermentation process in cured meats (which has gotten very popular in recent years) to Chef Umansky’s pioneering technique of growing Koji on proteins (giving them a  similar flavor to dry-aging in 48 hours as opposed to the months needed for traditional dry-aging).

Chefs are also using koji to make amino sauces out of proteins like Asian fish sauces or ancient Roman garums (fermented fish sauce). These sauces are deeply flavored and used to accent and enhance all types of dishes.

My closing advice to you is:-don’t be afraid of miso or koji! These ancient ingredients create some of the most flavorful dishes you can find while delivering powerful health benefits. Koji rice is truly changing the cooking landscape in restaurants and kitchens all around the world, one moldy, and gut-health-supporting grain at a time!
</ht