ThinkRice / How To / Frequently Asked Questions

You've got rice questions and we've got answers. Whether you are looking to understand the difference between long and medium grain rice or trying to find the perfect rice type for rice pudding, our collection of the most frequently asked questions (FAQs) has all the answers.

Can't find what you are looking for?  Contact Us
Where is rice grown in the United States?

Nearly 80% of the rice consumed in the U.S. is grown here!  Farmers in Arkansas, California, Louisiana, Texas, Missouri and Mississippi produce about 20 billion pounds of rice each year.  Meet our farmers to learn more!

What is the difference between long, medium, and short grain rice?

The difference between long, medium, and short grain revolves around physical grain characteristics and cooking application. Long grain rice has a long, slender kernel, three to four times longer than its width, while medium and short grain rice have shorter, wider kernels. Cooked long grains are separate, light and fluffy, and ideal for pilafs, stir-fry, Mexican cuisine, and Southern favorites.

Cooked medium and short grains are more moist and tender, with a greater tendency to cling together. This makes these grain sizes good choices for dishes that have a creamier consistency, as well as sushi and other Asian dishes. Learn more about U.S.-grown rice varieties.

What is the difference between brown and white rice? 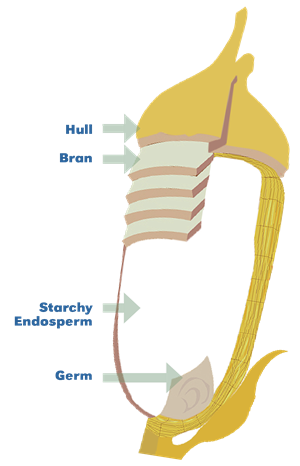 When rice comes from the field, the kernels are encased in an inedible, protective hull. This is called rough or paddy rice. To remove the hulls, rough rice is passed through machines called shellers.

After the hulls are removed, the remaining grain is called whole grain brown rice. It still retains the bran and germ layers, which are rich in vitamins, minerals, oil and various phytonutrients suggested to have health benefits. Brown rice is a 100% whole grain food and takes about 40 to 45 minutes to cook. Because of the oil in the bran layer, brown rice has a limited shelf life of approximately six months. Refrigerator or freezer storage is recommended for longer shelf life.

To turn whole grain brown rice into white rice, the grains are passed through machines that rub the grains together to remove the bran and germ. White rice has the outer husk, bran and germ removed. This process gives white rice an extended shelf life and a shorter cooking time of approximately 15 minutes. Most white rice in the United States is enriched with thiamin, niacin and iron, and fortified with folic acid, to restore nutrients lost during processing.

Which is better nutritionally: brown or white rice?

The answer is both! The 2020-2025 Dietary Guidelines for Americans and MyPlate recommend that “at least half of all the grains eaten should be whole grains,” meaning the other grain servings for the day should come from either whole or enriched grains, like brown or enriched white rice.

Both brown and white rice provide nutrients that are important for optimal health. Brown rice contains more dietary fiber and enriched white rice provides iron and B vitamins.  Can’t decide on one or the other?  You can always mix white and brown rice together for a mix of nutrients and flavor!

What is Wild Rice?

Wild rice is not technically a rice but is a semi-aquatic grass native to North America that is 100% whole grain.  Grains are long, slender, and dark brown.  Cooked grains have a cream-colored interior with a nutty flavor and chewy texture.

Rich in Thiamin, Lysine, Riboflavin, Vitamin B, and Iron, wild rice is also high in protein, low in fat and sodium, and a good source of fiber.  Wild rice is perfect for mixing with white or brown rice, and ideal for stuffing, salads, and soups, or for adding color and texture to breads and desserts.  To learn more about Wild Rice, visit the California Wild Rice Advisory Board.

Does rice have to be rinsed before cooking?

U.S.-grown rice does not require washing or rinsing before cooking because it is a clean, high-quality product. Additionally, rinsing can cause nutrient loss in enriched rice. If rice is rinsed or soaked before cooking, both the amount of liquid needed and the cooking time will be reduced slightly.

How do I reheat rice after it is refrigerated?

For each cup of cooked rice, add two tablespoons of liquid. Cover and heat on top of range or in oven until heated through, about 5 minutes. Or, in a microwave oven, cover and cook on high approximately one minute per cup. Frozen rice may be cooked two minutes on high power for each cup. Fluff with a fork before serving.

Which type of rice should I use for rice pudding?

The starch levels and consistencies of medium or short grain rice make them ideal for puddings and other dessert applications.

Which type of rice should I use for risotto?

Foodservice:  How do I best reheat cooked rice?

Rice may be reheated on top of the stove, in a steamer or in the oven. When rice is reheated, be sure that it reaches a core temperature of at least 165°F (74°C). Adding a small amount of moisture helps rehydrate the rice.

Foodservice:  How can I use rice to help control my costs?

Rice is a very inexpensive ingredient that provides generous plate coverage and allows you to reduce the amount of expensive ingredients (e.g. specialty produce and proteins) while increasing portion size. Dishes made with rice have a very high perceived value.

Foodservice:  Is rice safe to serve to customers with food allergies?

Rice is gluten-free and non-allergenic. It is an ideal food to serve to those who are allergic to gluten and cannot eat wheat-based products.

Foodservice:  How does rice perform in take-out applications?

Rice travels very well. It maintains its quality, taste and texture in take-out foods and is far superior to fries, for example, which get soggy and do not reheat well in a microwave.

There are so many reasons why such a simple, yet infinitely versatile grain can help your to-go menu stand out.

Yes, rice is available through the commodity program for school lunch and breakfast programs and other state and federal food programs.